Walmart and Target, the nation’s two biggest big box retailers, could join the country’s biggest drugstore chains in adding CBD products to their shelves. According to a report in the NY Post, top executives at major chains such as Walmart and Target have been quietly meeting with makers of drinks, gummy bears, topical creams and oils that are infused with cannabidiol, or CBD.

The chains, which also include big supermarkets such as Kroger and Safeway, are requesting samples of CBD products, along with lab results and pricing information, manufacturers said, despite the fact that the Food and Drug Administration said in December that it’s illegal to spike food and beverages with CBD or to transport them over state lines.

“We are flying around the country, talking to all the big guys at their headquarters,” said Christian Graversen, brand manager of California-based CBDfx, a 6-year-old company that makes more than 50 CBD-infused products including a $10 package of eight gummy bears. “We are going multiple times to the same companies, meeting with their senior buyers, legal departments and merchandising executives.”

According to Grocery Dive, Vita Coco chief executive Michael Kirban said retailers aren’t buying CBD products yet but are designing shelves and possible layouts for them, and a brand manager from CBD-infused product maker CBDfx told the New York Post that the company has been visiting “the big guys” at their headquarters.

About 40% of U.S. adults 21 and over have said they would try CBD products, according to market research firm High Yields Insights. The CBD industry is expected to more than double to $2.1 billion by next year, the New York Post reported, as consumer demand continues to rise.

Under the 2018 Farm Bill, which was signed last December, the federal government no longer classifies hemp and its derivatives as controlled substances, and states are now in control of CBD regulation. This has helped ease some retailers’ minds about offering CBD products, but the major remaining hurdle for the grocery and food industries is the Food and Drug Administration, which still hasn’t approved the use of CBD in food and beverages.

Food manufacturers are exploring CBD product lines and laying the groundwork to make a fast move once permitted. Snack maker Mondelez, for example, which makes Triscuits and Oreos, told CNBC earlier this month that CBD could be part of future snack innovations.

“Like many companies, we know there is consumer interest in CBD products, and the conversation is evolving quickly,” a Target spokesperson said. “We’re following the discussion, but currently don’t have any immediate plans to carry them.” 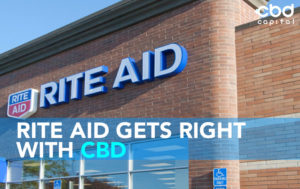